With having such a small area to grow in I can't really afford to just keep everything (though you might not believe me when you read my next post on Friday, lol). Thinking on this I have decided not to do any pest control at all this year, allowing me to see how different varieties cope with the two main pests that I have on potatoes. 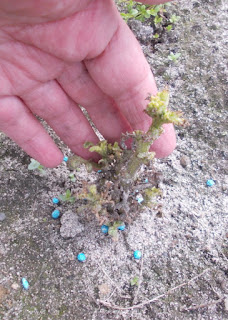 RLEM is my worst potato pest. It is an introduced mite with no natural enemies here, or natural control methods. It is usually controlled by harsh pesticides because the life cycle doesn't gel with preditory mites that you can buy to help with other nasty mites in the garden. RLEM are very hard to see as they are so small but they are black with red legs.

RLEM can destroy a  bed of vegetable seedlings in a couple of days and only goes dormant in summer and winter. It is really bad on sandy soils.

These mites swarm young plants and suck out all their juices, leaving silvery patches on the leaves, or, in the case of potato shoots, destroying the new leaves altogether like this shoot on the left.
As the weather warms up and gets hotter they disappear and the plants can grow normally. 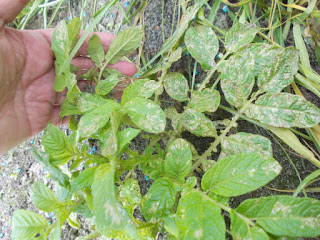 The plant on the right is a bit older and you can see the silvery patches on the leaves. If you look carefully you can also see the teeny tiny black mites.

RLEM are hammering my sprouting potatoes at the moment but I can already see a couple of varieties that are able to grow quickly enough to outgrow the feeding, and a couple that show very little mite feeding at all. I will note them on their variety spec sheets.

The silvery patches may look a little like spider mite damage to those who are inexperienced but it isn't close after you have see damage by both. And spider mites look and behave much differently too. 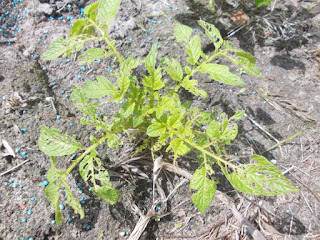 The next pest is one that skeletonises the leaves of young plants. I don't know what this pest is as it doesn't seem to come out during the day.

I have never bothered with it much over the years as the plants outgrow it, but it does cause them to grow slower at first.
Tonight I will go out and put down some rolled up paper and see if I catch anything to identify in the morning.
Some varieties have less problems with this than others.

I think that it is more likely that the varieties that are less bothered with these pests are ones that outgrow them quickly rather than having much in the way of resistance. It is more of a better tolerance than resistance, but I will work on whether this guess is accurate over the next year or two.

For now I will be deselecting varieties that show too much damage from these pests to make way for better ones, unless that variety has another particularly good trait that is worth keeping it for.

Other things happening in the garden 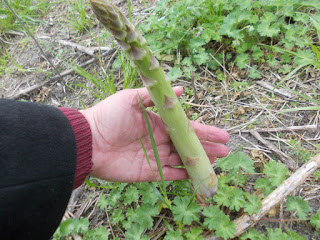 The asparagus is sprouting away. I always love it when the 'Argenteuille' is sprouting as it has such huge and tender spears. each one is a meal in itself.

I managed to keep a couple of young purple asparagus crowns as well which I planted among the Argenteuille so the bed will look colourful later on. 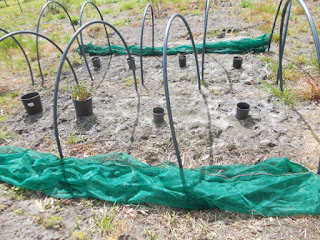 I couldn't give up on the oca altogether so I plants 4 plants of 8 varieties in these two covered beds. Four of these are new seedlings from last year, and four are older selected ones.

Hopefully they will make it through the forecast scorching summer to come. No biggie if they don't as I know the summers are not way too hot for them.

rowan
I live in Victoria, Australia. Now that I am not farming any more I have settled down to my hobby of breeding potatoes. In Australia we are severely lacking in potato varieties for home gardeners to choose from

Have new posts sent to your Email